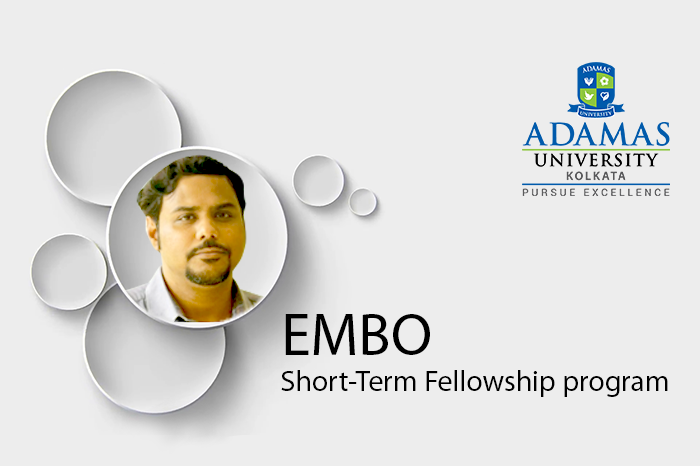 I, Dr. Neloy Kumar Chakroborty, am employed as an Assistant Professor in the Department of Microbiology of Adamas University, since June 2017 (Employee ID: 55172). I received my doctoral degree from Freie Universität Berlin, Germany in Neurobiology in 2012. I continued my research in cognitive neuroscience during my postdoc and used different techniques and animal models to understand the behavioral, neural and molecular-genetic underpinnings of learning and memory processes in animals. My excitement about the domain of learning and memory is driven both by its utmost importance in the sustenance of daily life and by its intriguing complexity. I have worked as a post-doctoral research associate at National Brain Research Centre, Gurgaon and as a Visiting Scientist at Indian Statistical Institute, Kolkata from 2014 to 2017.

This year I have applied to the highly prestigious EMBO Short-Term Fellowship program and I am extremely glad to let you know that my application has been accepted. The award is financially sponsored by the General Programme of the European Molecular Biology Conference for the period of 90 days. I am planning to visit the laboratory, headed by Dr. Albrecht Haase at the University of Trento, Italy, to perform a research project (some details of the project are given below) during the tenure.

In this research project, we will perform the cutting edge fast two-photon microscopy in the brain of live honeybees to generate the world’s first 4D neuronal activity maps in an invertebrate model system. This will also be the world’s first brain map which will contain the morphological measures of neurons overlaid with their activity patterns, recorded at the highest spatial and temporal resolutions. It’s my deep pleasure and honour to work in Adamas University and represent the university on a world stage where state-of-the-art research is dominating the fate of mankind.

Title of the Submitted Project:
Deciphering the neuronal population code in a higher-order brain centre: a high-resolution imaging study in the honeybee olfactory system

Summary and biological significance of the proposed research:
The olfactory system of the honeybee is a goldmine for researchers to study information processing in the neural networks of the central nervous system. The proposed research project seeks to investigate the spatio-temporal coding mechanisms for odors in the principal neurons of the mushroom body (MB) neuropile (a higher-order brain centre), called Kenyon cells (KCs), utilizing the high spatial and temporal resolutions of the two-photon laser scanning microscope. No one previously has used fast two-photon microscopy to look into the odor coding mechanisms of the extensive network of KCs, which inevitably has left a void in our understanding of the network functioning of MB. In the laboratory of Dr. Albrecht Haase at the University of Trento, Italy, I want to use my expertise in functional imaging in the honeybee brain to establish a novel two-photon-based imaging assay for the KCs. We will record the odor- induced calcium activities of the surface and profound KCs for the first time to understand whether the ensemble of KCs form the spatial codes for odors and their mixtures, whether odors with different ecological significance are coded differently by the KCs, and whether there are odor-specific temporal coding patterns in the KCs. The results of this study will unveil the details of physiological processing of sensory information of the whole neural network of a higher-order brain centre and thus will contribute significantly to our understanding of the fundamental aspects of network functioning with the expectation to extract evolutionarily conserved principles of information coding of the brain.